EPS has received the internationally prestigious Ruban d’Honneur award at the European Business Awards which took place on May 27th in Athens.  The award is in recognition of the Group’s Environmental and Corporate Sustainability strategy, which has seen the business reduce and minimise the impact of its activities within its workplace, market, environment and community. 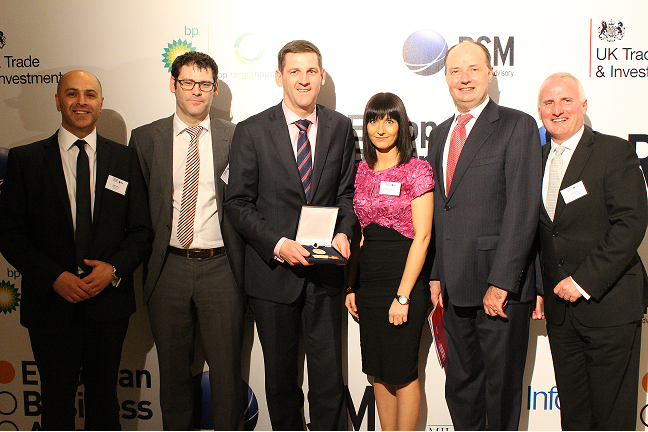 The European Business Awards is an independent awards programme designed to recognise and promote excellence, best practice and innovation in the European business community.   In the 2013/14 competition, the seventh in its history, all EU member markets were represented as well as Turkey, Norway and Macedonia.  The ceremony was attended by 400 business leaders, academics, media and political representatives.

Over 17,000 European companies entered the 2013/14 Awards, of which there were 100 finalists and 10 overall category winners.  Participants represented a combined turnover of over €1 trillion Euros (8.23% of EU GDP), employing over 2.7 million people.  Four Irish companies made it to the final stage; EPS Group, Agile Networks, AirSpeed Telecom and the Irish Dairy Board.

Over 150 esteemed judges, made up of European business leaders, academics and entrepreneurs have been involved in the robust, four-stage awards process which included written submissions, video entries judging and face-to- face presentations.  Entrants were judged on a vast array of business markers including innovation, ethics and international mind-set.

We feel very proud to have received a Ruban d’Honneur award and consider it a real mark of distinction. To be officially recognised as one of the 100 most successful European companies doing business today is a testament to the innovation, commitment and focus of the EPS team. In recent years we have worked hard to develop sustainable solutions which enable both EPS and our customers to responsibly manage and conserve energy and water resources